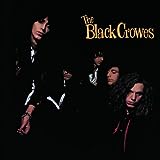 The Georgia rock band led by the brothers Chris and Rich Robinson played a ragged mixture of garage rock and alt-country for about five years under the name Mr. Crowe's Garden reportedly inspired by Johnny Crow's Garden, an early 20th century children's book by Leonard Leslie Brookes before changing it to something a little more with their Humble Pie and Faces obsession. As limp as their original moniker was, though, it could have been much, much worse: According to Black Crowes drummer Steve Gorman, Def American head Rick Rubin once told them, "'I think you should be the Kobb Kounty Krows and spell it [like] the KKK.' And we all laughed, and he goes, 'No, I'm serious. . . I think that'd be marketable.' We told him to go fuck himself. I mean, it was completely insulting on every level." ****I don't blame tha band one bit for this. Kudos to them!****