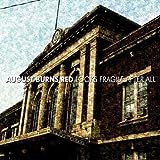 Looks Fragile After All album at Amazon.com

"We had our name because in high school, one of our best friends, Jon Hershey, who was also our vocalist at the time. But right before he joined the band, he was dating this girl named August. And the relationship got a bit out of hand and he really wanted to end it. So he ended the relationship and instead of getting just sad about it, she got really really really angry and Jon at the time had a dog named Redd, it was an Irish setter and it had red fur and everything. So she got really mad, went up to his house, and burned his dog Redd alive, in his dog house. And the name and everything comes from, because the next day, the headlines in the newspaper in the local news was "August Burns Red" and then we just kind of went with it. It really affected Jon, so when we were picking a band name, that was one that stuck in his head, so he decided to use it. So our name doesn’t mean nothing, it just had a really weird and kind of gross meaning. - guitarist Brent Rambler on the naming of the band