"Last of the Breed"

This one requires a little backstory. There's this visual novel called "Planetarian: The Reverie of a Little Planet," in which in a post-apocalyptic city, this man, an unseen narrator speaking in the first person, runs into a robot/android/persocom girl named Reverie Planetarian. He finds out he's in an abandoned planetarium, and that Reverie's been waiting 30 years for someone to visit the place. The guy, despite himself, gets attached to her, and, well...SPOILER WARNING if you read the lyrics of this parody. So, view at your own risk.
One day you'll see her in that black night air.
She's the one with the ribbon and flowin' light blue hair.

Wave up to her and look into her stars.
It's a good night, when you'll see her bright green eyes from afar.

You'll try to touch her, but she is just a dream.
But for a little while she's as real as it seems.

She's a dream-chasing relic of a day long gone by.
A robotic maiden with emotion in her eyes.
A lone ray of hope in a world consumed by greed.
A little lady, known just as Reverie.

Told me stories, of life before the war.
Using sights and visions that I've never seen before.

She saw the world when it was still alive.
Then speak of good friends and good times, and that same old starry sky.

Then we both left that planetarium's shell.
Still blame myself 'cuz it was me who put her through Hell.

Met a cold-hearted killer of another day gone by.
This one wasn't like her, was something I'd despise.
It took that maiden from this world full of greed.
It took away my...hopeful friend, Reverie.
Didn't deserve it, poor poor girl, Reverie.

The address of this page is: http://www.amiright.com/parody/2000s/dosgringos1.shtml For help, see the examples of how to link to this page. 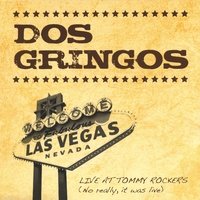 Live At Tommy Rockers (No Really, It Was Live)