Jokes about Kanye West from the largest music humor site on the web. Check out the index for other performers we have jokes about. 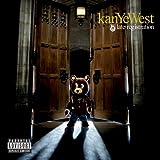 It's great that Obama won the Nobel Peace Prize, but Kanye West reckons it should've gone to Beyonce!