Jokes about Rihanna from the largest music humor site on the web. Check out the index for other performers we have jokes about. 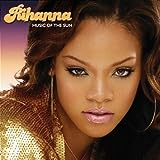 Music of the Sun album at Amazon.com

Am I the only one that finds it extremely ironic that Rihanna is beating Chris Brown in the album charts?

Anyone else disappointed to see that Chris Brown Vs. Rihanna wasn't an ESPN Pay-Per-View event? It was on MTV and only involved signing...

Q: How did the weatherman annoy Rihanna? A. He kept telling her she could stand under his Umbrella.

Q: What's Black and Blue and hates Brown? A: Rihanna!!!

To cheer herself up, Rihanna went to the local candy store to buy some mints. But Chris Brown already had a few Jaw-breakers waiting for her at home...