Jokes about Pavarotti from the largest music humor site on the web. Check out the index for other performers we have jokes about. 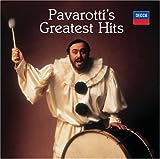 Did you hear that Pavarotti's wife found 20 quid this morning?
Makes up for the tenor she lost the other day.

Elton John is to replace Pavarotti in the three tenors.
It will now be known as the two tenors and the nine bob note!

I can sympathise with the Italians after the death of Pavorotti
I know what it's like to lose a tenner...

Pavarotti tribute buffet..... all you can eat for a tenor!

St Peter walks up to the Pearly gates and knocks.
God asks what he wants. St Peter replies "Here's that tenor I owe you!"

Whats Pavarotti's wife getting for Christmas?
A smaller turkey...

With the death of Pavarotti the Three Tenors will from now on be called twenty quid!
Tickets are available for Pavarotti's funeral - only a tenor!