There are additional Zao song titles with a letter added available.

A Zoo Submitted by: Bridget Andrews
That was easy! 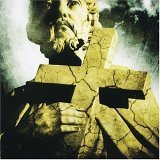 The Funeral of God The Splinter Shards the Birth of Separation Where Blood and Fire Bring Rest